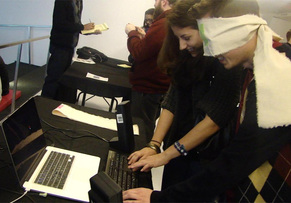 Silent Hunter is an audio-only game made at the Global Game Jam 2013 with Atlas Chen.
It is played by two players, one acts as the hunter, the other the prey. The hunter's goal is  catching the prey while the prey tries to survive for as long as possible. Players cannot get any information from the screen, they have to make movement decisions by hearing sound. It can also be played as a party game in Spectator Mode, in which players have to blind themselves and the spectators can see what is happening on the screen.

The game was honored by The Global Game Jam 2013 NYU Game Center site as the "Best audio design", and nominated for  "Best use of theme".

The game was showed during Indiecade East 2013, and was mentioned here.